When I was a boy way back in the 1950s, pretty much a Sunday School drop-out, I still learned this little ditty: “Here’s the church, here’s the steeple. Open the doors and see all the people.” Well no, that’s not the church – not the building, not the steeple, and not the comfortable pews for all those people to rest their rears on.

So what is the Church according to the Apostles’ Creed? Last week I suggested that the third section of the Creed is devoted to the Third Person of the Trinity, the Holy Spirit, God in Us. But who is “Us”? The Creed sketches an answer to this question. “I believe in the Holy Spirit” leads naturally to the two following clauses: belief in “the holy catholic church,” and “the communion of saints.”

The Nicene Creed expands on this statement, saying: “I believe in one … holy … catholic and … apostolic church.” From this definition, theologians speak of four “marks” of the Church. Let’s look at each briefly.

The Church is one. Christian faith in one God is founded on the Old Testament confession: “Hear O Israel, the Lord our God is One” (Deut 6:4). The apostle Paul restates this confession in Trinitarian terms: “There is one Body and one Spirit – just as you were called to the one hope that belongs to your call – one Lord, one faith, one baptism, one God and Father of all, who is over all and through all and in all” (Eph 4:5-6).

One prime implication of the Church’s unity is koinonia. Koinonia is often translated “fellowship,” but a stronger word is communion, and the Book of Acts gives us a snapshot of what communion looks like: “And all who believed were together and had all things in common. And they were selling their possessions and belongings and distributing the proceeds to all, as any had need” (Acts 2:44-45). The word communion can also be used for Christians united in a particular tradition, such as the global Anglican Communion.

The Church is holy. Again, the holiness of the Church is rooted in the call of the people of Israel to be a kingdom of priests and a holy nation (Exod 19:6). “I am holy, so you shall be holy,” says the Lord to Moses. Holiness is the very character of God Himself, and the call to holiness sets apart each believer and the church from the idolatry and immorality of the fallen world. The apostles began to refer to church members as “saints” both individually and corporately.

The phrase “communion of saints” in the Creed brings together these two marks of unity and holiness. As time passed and some believers died, the conviction arose that the love among brothers and sisters in Christ could not be separated by death. On November 1, All Saints’ Day, we celebrate this ongoing fellowship of the church: “She on earth hath union with God the Three in One, and mystic sweet communion with those whose rest is won.” The idea of victory over death led to the term “Church Triumphant” for believers in heaven.

The Church is catholic, a word which means “universal.” The universality of the Church follows from its unity. This universality was not self-evident on Easter Day, when Christ appeared to his Jewish disciples; but from the Day of Pentecost on, God made it clear that there is only one church dispersed among the nations. The church is catholic through space and time. At the Last Supper, Jesus prayed not only for those sitting with Him at table “but also for those who will believe in me through their word, that they may all be one, just as you, Father, are in me, and I in you, that they also may be in us …” (John 17:20-21). This extended flock includes every believer throughout the world and throughout history. Jesus was praying for them there and for us here today and for any who come to Him through our witness!

The Church is apostolic. On the Day of Resurrection, Jesus breathed on His apostles and said, “Receive the Holy Spirit. If you forgive the sins of any, they are forgiven them; if you withhold forgiveness from any, it is withheld.” Jesus in effect authorized His apostles to represent Him. This is why Paul can speak of the Church as “built on the foundation of the apostles and prophets, Christ Jesus himself being the cornerstone” (Eph 2:20).

“Apostolic” means several things. The New Testament is authoritative because it records the memory and writings of the apostles. The Creeds are apostolic because they are “according to Scripture” and they refute some of the basic heresies about the Gospel. The Church’s historic order, ministry, and worship – for instance, the sacraments of baptism and Holy Communion – were passed on to us through the apostles to the early church.

So, one, holy, catholic, apostolic – these are the four classic marks of the church of Jesus Christ. I want to add three other marks which I believe are unstated but implicit in the creeds. The Church is missionary, it is persecuted, and it is congregational. Four plus three is seven, a good biblical number! So here we go.

The church is missionary. The description of the Church at Pentecost begins and ends with these two statements: “So those who received his word were baptized, and there were added that day about three thousand souls” … And the Lord added to their number day by day those who were being saved.” Mission is to the church as breath is to the body, it is said, which is not surprising as the Spirit is the source of our individual our corporate life. A church that does not reach out to others with the Good News and the love of Christ is no church.

The church is persecuted. Jesus warned His disciples that they would be dragged before religious and secular rulers for their witness to Him, and this happened from Pentecost on. Written fifty years later and reflecting one of the periodic Roman persecutions of Christians for not revering the Emperor as divine, the book of Revelation contains a vision in which John is shown a countless number of believers from every tribe and nation on earth: “These are the ones,” an angel tells John, “coming out of the great tribulation. They have washed their robes and made them white in the blood of the Lamb” (Rev 7:14). This is the church of the martyrs, purified in their own blood. Potentially, we are all in that number.

Today the persecuted church is more numerous and widespread on every continent than in any point in history. To its credit, our Prayer Book now couples a petition for all who proclaim the Gospel with a petition for all who are persecuted for their faith (BCP 128). We in the West are experiencing a kind of cultural persecution, in which Christianity is equated with hate and injustice. To the extent these charges are true, we need to repent; at the same time, we should not be surprised when the Church and Christians are falsely accused, for so they treated the Lord of the Church.

The church is congregational, even as it is one and catholic. The Greek word ekklesia means a local assembly or gathering, whether sacred or secular. After Pentecost the first church in Jerusalem gathered together in one place. The first missionary churches in the Gentile world gathered in houses. The Reformation spawned independent congregations and in England geographic parishes. In America, the welter of denominations led to overlapping congregations, sometimes with a megachurch or a mother church overseeing smaller mission fellowships.

And that’s where we come in. Redeemer was a church plant of St. Stephen’s parish in Sewickley, and now we are taking steps to become an independent congregation in the Anglican Diocese of Pittsburgh. 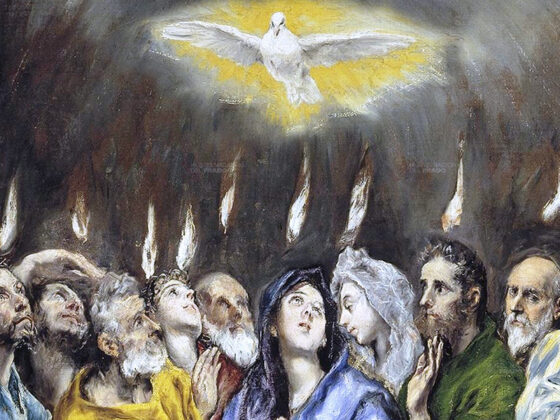 BASIC BELIEVING: The Holy Spirit, God in Us