In recognition of the “solar eclipse” of Father’s Day (USA and UK) and Trinity Sunday, I am re-posting something I wrote last year, noting that in the absence of a feast in the church year for God the Father, Trinity Sunday is a most apt day of remembrance.

Further, let me note the near eclipse with Flag Day (USA) on June 14, on which Americans honor the adoption in 1777 of its “star spangled banner” and “the Republic for which it stands.” When I began my ministry in the Episcopal Church, it was the custom to parade the flag on national holidays in the sanctuary and sing the National Anthem immediately after the Doxology. (Vietnam protesters – now retired Episcopal bishops – shouted “Kill, kill!” as an antiphon. Oh, to be back in the Sixties!) The Episcopal Hymnal includes the American version of “God Save the King!” with this verse: “Our fathers’ God, to thee, Author of liberty, to thee we sing… Protect us by thy might, Great God, our King.”

I am not proposing a nostalgic return to a particular practice, but I do want to call attention to the basis for a kind of “patriarchal convergence” in a neglected text (see more below) where Paul prays: “For this reason I bow my knees before the Father, from whom every family (Greek patera) in heaven and on earth is named” (Ephesians 3:14-15). In this verse, I think, Paul roots respect of paternal authority in the family, the monarch (“Caesar”) and the homeland in the Person of the Father.

This patriarchal convergence is about as counter-cultural as one can get in today’s society. All the more reason to lift high His royal banner and celebrate Sunday as God the Father’s Day.

Recently I was teaching a 3-semester survey course on systematic theology, partitioned according to the Persons of the Holy Trinity, and thus the first semester was on “God the Father.” When I went to assemble the bibliography at the nearby seminary library, I was puzzled to find that there were virtually no books exclusively dedicated to the doctrine of the Father.

One of the few I found was by Tom Smail, titled The Forgotten Father (1980). Interestingly, Smail was a leader in the charismatic movement in the 1970s. He was, however, not an uncritical leader. Smail argues:

It would be easy to dismiss Smail’s comment as equally unbalanced, but before we do, let’s think about the standard “geometrical” model many use in teaching the doctrine of the Trinity. 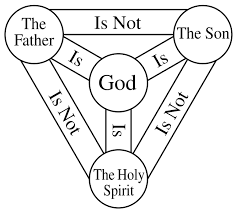 Not only is this model sterile – who wants to love and serve a fidget spinner? – it can be rotated in any direction. The Father could be on the left or on the right or on the bottom and God remains God in the center. But is this really the way the Bible speaks of the Father?

There is a genuine reason why the doctrine of God the Father is so mysterious. The Father is the hidden God of the Old Testament (Isaiah 45:15) and the Unknown God of the pagan world (Acts 17:23). John’s Gospel puts it this way: “No one has ever seen God [the Father]; the only-begotten God [Jesus], who is at the Father’s side, he has made him [the Father] known. (John 1:18). When Philip asks Jesus to see the Father, Jesus replies: “Have I been with you so long, and you still do not know me, Philip? Whoever has seen me has seen the Father” (John 14:9). St. Paul puts it this way: “For God, who said, ‘Let light shine out of darkness,’ has shone in our hearts to give the light of the knowledge of the glory of God in the face of Jesus Christ” (2 Corinthians 4:6).

So our primary access to the Father is through the Son. This is true conceptually and also in the Spirit, in prayer.

Now Jesus was praying in a certain place, and when he finished, one of his disciples said to him, “Lord, teach us to pray, as John taught his disciples.” And he said to them, “When you pray, say: “Father, hallowed be your name.” (Luke 11:1-2)

One might call this scene Catechism Class 101. We want to pray like the Master, but the Master prays like no one else, neither Jew nor pagan, in the history of the world. Only Jesus prayed to “Abba” – “Blessed Father” (please, please, not “daddy”!) and now He invites us to join him, praying “Our Father.”

The first thing Jesus prays and invites us to do likewise is to glorify the Name of the Father: “Hallowed be Thy Name” (cf. John 12:28). This petition teaches the church the priority of the Father. The Father’s Name comes first and represents the Godhead and in this sense unites the Trinity. Hence the Creeds begin: “I believe in God the Father Almighty, maker of heaven and earth.” There is no comma or colon after “God”; the Father is the proper Name of God. Hence throughout the New Testament, “God” naturally refers to the Father: “Grace to you and peace from God the Father and the Lord Jesus Christ.”

God the Father is the author of all things: our Creeds follow the earliest apostles in confessing “one God the Father, from whom are all things and for whom we exist, and one Lord Jesus Christ, through whom are all things and through whom we exist” (1 Corinthians 8:6). The Father is the source even of the Son and Spirit. The early church wrestled with how to express the relations of the Triune God, and all the Great Traditions affirm the Father as the “font” or sole source of divinity:

Teach also that we must not make the Father subject to [another] source, lest we posit a “first of the First,” and thus overturn the [divine] Existence. Nor should we say that the Son or the Holy Spirit is without source, lest we take away the Father’s special characteristic. (Gregory Nazianzus Oration 25.15).

It is clear that the Son has another from whom he is and whose Son he is, while the Father does not have a Son from whom he is, but only whose Father he is. Every son gets being from his father, and is his father’s son, while no father gets what he is from his son, though he is his son’s father. (Augustine, De Trinitate II.2)

The Father’s authority is monarchical internally within the Godhead and externally in creation and history. Hence our Lord’s second petition follows: “Thy Kingdom come, Thy will be done, on earth as in heaven.” When St. Paul prays, he begins this way: “For this reason I bow my knees before the Father, from whom every family (Greek patera) in heaven and on earth is named (Ephesians 3:14-15). The word patera here suggests that the Father has established every structure of created order – from the ranks of the angels to the earthly principalities to the “holy orders” of the Church, to the relationship of husband, wife and children in the family (Ephesians 5:22-6:4). In short, the relations of the divine Persons of the Trinity – the monarchia – is reflected as well in the relations of human society on earth.

In the current climate of the West, Tom Smail’s book might be renamed “The Abusive Father.” Contemporaries attack “the patriarchy” seeking not so much to expose and reform perversions of authority as to subvert authority altogether. As for the Atonement, these people cry “divine child abuse” and close their ears to St. Paul’s words: “He who did not spare his own Son but gave him up for us all, how will he not also with him graciously give us all things?” (Romans 8:32). Behind these attacks lies a spiritual rebellion against the Divine Patriarchy that emanates from the First Rebel and his worldly minions (cf. Psalm 2).

So what about devoting Trinity Sunday to the Father?

*Note on the Rublev Icon (Wikipedia) above: The main biblical and church tradition precludes pictures of the Father. However, Orthodox iconography permits foreshadowings of the Trinity as in the account of the three angels who dine with Abraham (Genesis 18). 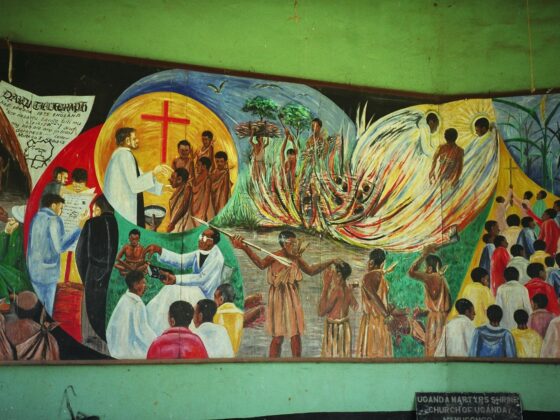 “UNASHAMED OF BEING A GLOBAL ANGLICAN”: A Contention for Martyrs’ Day 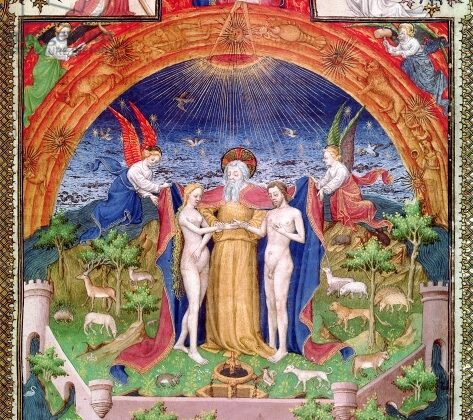 IMAGE-BEARERS FOR GOD: Does Biblical Language for Man Matter?