“Father, forgive them, for they know not what they do.”

Note: I have never before preached on this word from the Cross. I’m not sure why, but here goes.

The Apostles’ Creed concludes with a brief catalogue of the doctrines of the faith: “I believe in the Holy Spirit, the holy catholic church, the communion of saints, the forgiveness of sins, the resurrection of the body, and the life everlasting.” Coming as it does after the Holy Spirit, the Church and the Communion of Saints, it seems likely that the “forgiveness of sins” is related to the sacraments of baptism and eucharist.

Forgiveness of sins has been partnered with repentance and baptism from the days of John the Baptist. On Easter night, the Risen Lord breathed on the apostles and promised: “Receive the Holy Spirit. If you forgive the sins of any, they are forgiven them; if you withhold forgiveness from any, it is withheld” (John 20:22b-23). Soon thereafter, Peter preached on Pentecost: “Repent and be baptized every one of you in the name of Jesus Christ for the forgiveness of your sins, and you will receive the gift of the Holy Spirit” (Acts 2:38).

Likewise, Jesus’ words of institution at the Last Supper – “Drink of it, all of you, for this is my blood of the covenant, which is poured out for many for the forgiveness of sins” (Matthew 26:27-28) – establish the basis for the New Covenant: the shed blood of the Lamb.

It is no accident, then, that “Father, forgive them” is the first Word from the Cross. From that simple petition all the Work of Christ and His benefits follow.

The Source of Forgiveness

“Father, forgive them…” The source of forgiveness is the Father. Jesus’ paradigm Prayer for the Church, begins with “Our Father…” and comes to its climax in the petition to “forgive us our trespasses,” along with the warning: “if you do not forgive others their trespasses, neither will your Father forgive your trespasses” (Matthew 6:15). Indeed the first act of prayer, clearing the ground for all that follows, is to forgive: “Whenever you stand praying, forgive, if you have anything against anyone, so that your Father also who is in heaven may forgive you your trespasses” (Mark 11:25). In several parables, Jesus taught about forgiveness, none more powerful than the Prodigal Son, whose father received and restored him with joy.

Martin Luther famously stated: “Forgiveness is God’s command.” It may be a command for us, but from the lips of Jesus, it pours forth pure grace. While Jesus struggles in the Garden with the cup of suffering and utters the cry of dereliction from the Cross – “My God, my God…”, never does He struggle with the will to forgive. Never does He say of His creatures: “Exterminate the brutes!” Never does He wonder if the work of salvation is worth it (it is), or whether the recipients of salvation deserve it (they don’t).

John’s Gospel sums up Jesus’ Passion thus: “Now before the Feast of the Passover, when Jesus knew that his hour had come to depart out of this world to the Father, having loved his own who were in the world, he loved them to the end” (John 13:1). Jesus transforms the Passover into a love feast, washing His disciples’ feet and offering them a meal of communion in His broken Body and shed Blood. The poet George Herbert captured the mystery of this communion, saying: “Love is that liquor sweet and most divine which my God feels as blood but I as wine.”

The source of forgiveness is the pure love of the Father and the Son, communicated through the Holy Spirit and offered in the sacrament of the Table.

The Cause of Forgiveness

“Father, forgive them, for they do not know what they are doing.” Looked at from one point of view, this seems like odd logic. Surely, the Roman soldiers, Pontius Pilate, the Jewish Sanhedrin, Peter and the apostles, Judas Iscariot, all knew what they were doing. None of them would win a court case with a defense based on insanity or ignorance of the law. St. Paul saw the futility of any such claim: “For all who have sinned without the law will also perish without the law, and all who have sinned under the law will be judged by the law” (Romans 2:12). So, according to Paul, they are all “without excuse.”

Is Jesus being sentimental here in offering forgiveness without proof of repentance? Is He promoting a “moral influence” view of His atoning death, excusing His persecutors on grounds of ignorance? Is He suggesting that “love covers a multitude of sins” like a blanket? Given Jesus’ stern warnings of coming judgment for the nation and of His own return in glory to judge the quick and the dead, such a view of Jesus is implausible. Jesus knew what was in the heart of man, and that it was evil (John 2:24-25; Luke 11:13).

Let me take a stab at explaining this strange and wonderful word from the cross by considering the case of Satan. Satan was created good and immortal in the beginning. Of his own self-generated and vaunting pride, he rebelled, and his condemnation is irrevocable. While created an angel of light, he chose darkness, and darkness is his eternal lot. Adam and Eve were created good and mortal, were deluded by Satan and fell into sin. God provided a long way home through exile, mortality and a faint hope of victory over Satan and eternal life (Genesis 3:15). Paul referred to the age between Adam and Christ as “times of ignorance,” and he described his own missionary mandate to the Gentiles “to open their eyes, so that they may turn from darkness to light and from the power of Satan to God, that they may receive forgiveness of sins and a place among those who are sanctified by faith in me” (Acts 17:30; 26:18).

The paradox of the Gospel is that the true light came into the world, and the world received Him not. But it is also the unfathomable greatness of God’s mercy that He refused to be rejected: “For if, because of one man’s trespass, death reigned through that one man, much more will those who receive the abundance of grace and the free gift of righteousness reign in life through the one man Jesus Christ” (Romans 5:17).

The offer of forgiveness of sins, while freely given, always and only comes from the Cross of Calvary.

The Scope of Forgiveness

Who was Jesus praying for? The most immediate objects were the Roman soldiers who had nailed Him to the Cross. Then there was Pontius Pilate, who had weakly pronounced the death sentence. Then there was the Sanhedrin, the priests and scribes who conspired to kill him, and the crowd who cried out “Crucify him” and mocked His kingship on the Cross. Then there was Judas, who betrayed Him, and Peter who denied Him and the disciples who abandoned Him. All were implicated in His solitary death. Surely all these were standing in the need of Jesus’ prayer.

But there were others, not directly at fault, included in His prayer. From His first synagogue sermon, Jesus had proclaimed good news to the poor, liberty to the captives, recovery of sight to the blind, liberty to the oppressed, and the arrival of the year of the Lord’s favor (Luke 4:18-19). He had announced to the paralytic: “Your sins are forgiven,” and he took up his pallet and walked. He said of the sinful woman who wiped and anointed his feet: “I tell you, her sins are forgiven, for she loved much” (Luke 7:47). At the Last Supper, he spoke of “other sheep not of this fold” whom he would gather by His Spirit after He had gone to the Father.

Jesus’ prayer from the Cross ripples out from Calvary, as the Church responds to the Risen Lord’s Easter Commission to announce that “the Christ should suffer and on the third day rise from the dead, and that repentance and forgiveness of sins should be proclaimed in his name to all nations, beginning from Jerusalem” (Luke 24:46-47).

Jesus’ prayer is not unconditional or universalist. There are those like Judas, who have tasted the grace of God and turned away, who have resisted the Holy Spirit. There are many who presume on His grace, crying “Lord, Lord” while not doing what He says. There are multitudes who have not heard for want of a preacher “to publish Glad Tidings of Jesus, redemption and release.” The forgiveness of God is costly and the gate to heaven narrow, though freely offered to all.

The prayer of forgiveness continues to rescue sinners and make pilgrims down the ages because it proceeds from the throne of the Lamb that was slain, who ever lives to make intercession for us (Revelation 7:6; Hebrews 7:25). That intercession is ongoing and once-for-all: “As it is, he has appeared once for all at the end of the ages to put away sin by the sacrifice of himself (Hebrews 9:26).

From first to last, the Word of the Cross is “Forgiven” and “Finished.” 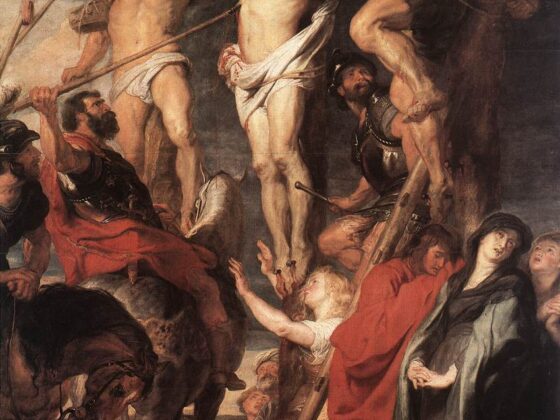 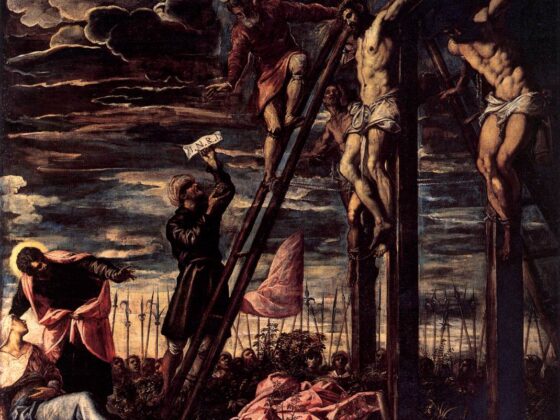 EASTER OCTAVE, DAY FOUR: “My God, My God, Why Have You Forsaken Me?”