On Easter morning, a grieving but credulous Mary Magdalene saw two Angels seated in the tomb, where the body of Jesus had lain (John 20:12). I conclude my meditations with George Herbert’s fine Easter poem:

Lord, who created man in wealth and store,
Though foolishly he lost the same,
Decaying more and more
Until he became
Most poor.
With thee
O let me rise
As larks, harmoniously,
And sing this day thy victories:
Then shall the fall further the flight in me.
My tender age in sorrow did begin
And still with sicknesses and shame.
Thou didst so punish sin,
That I became
Most thin.
With thee
Let me combine,
And feel this day thy victory:
For, if I *imp my wing on thine,
Affliction shall advance the flight in me.

*To “imp” means to “graft” feathers onto an injured falcon’s wing.

For my oral rendition of the poem, listen here:

“Easter Wings” is one of the most famous examples of a “shaped poem” where the form follows the content (Lewis Carroll’s “The Mouse’s Tail” in Alice in Wonderland is a nonsense example.) Herbert himself tried another example, “The Altar,” in which he likens his heart to brittle stone and prays that it may be softened and lifted up as an offering to God by Christ’s sacrifice: “O let thy blessed SACRIFICE be mine, and sanctify this ALTAR to be Thine.”

In “Easter Wings” Herbert tells the Christian story twice over: the first “wing” moves from the glory of man’s creation in God’s image to his successive acts of disobedience until he, like the prodigal son in a far country, becomes “most poor.” But this is not the end of the story, because Jesus “for your sake became poor, so that you by his poverty might become rich” (2 Corinthians 8:9). The tomb now being empty, He offers the poor in spirit like Mary a glorious flight to the heavenly realm. Christ’s victory is, ironically, “furthered” by his condescension to become sin for our sake.

The second “wing” is addressed not to “man” but to “me.” George Herbert himself was portrayed as an exceedingly thin man. While we do not know much about his physical health, apart from his early death from tuberculosis, we do know that he was a melancholic, often plagued with depression, “sorrow” and “shame” (see “The Flower”). Yet from that “thinness” he finds “in Thee” – the Son who had “made himself nothing, taking the form of a slave” (Philippians 2:7) – the power to rise like a mighty falcon, affliction furthering his flight.

For George Herbert, there was no separating the present reality of sin, sickness and death from the hope of resurrection and new life, because both are found in Christ. St. Paul put it this way: “We were buried therefore with him by baptism into death, in order that, just as Christ was raised from the dead by the glory of the Father, we too might walk in newness of life” (Romans 6:4). Perhaps one might say that as Jesus was baptized on the wings of a dove, so he was – and we are – was raised on the wings of the angels.

The Grief of the Good Friday Sacrifice and the Joy of the Easter Day Resurrection are of a piece, and hence our faith is not in vain:

But in fact Christ has been raised from the dead, the first-fruits of those who have fallen asleep. For as by a man came death, by a man has come also the resurrection of the dead. For as in Adam all die, so also in Christ shall all be made alive. (1 Corinthians 15:20-22).

A suggested Easter carol from King’s College, Cambridge, is “This Joyful Eastertide.”

For those who aren’t into boy choirs, here is a clip of Robert Duvall singing “On the Wings of a Dove” from “Tender Mercies,” one of my favorite movies of redemption. 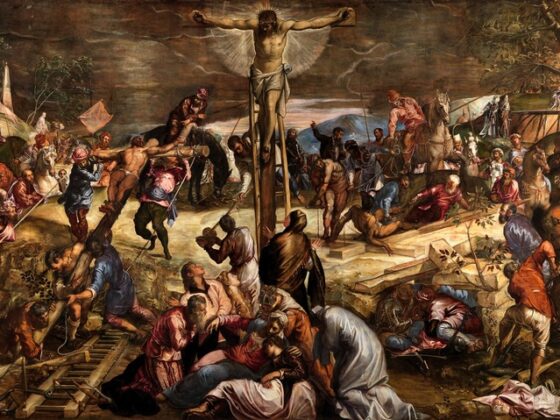 “CINDERELLA MAN”: A Video for Our Time 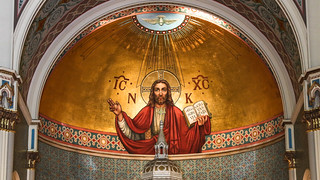