Over the past 18 months I have been writing a series of articles (here and here) employing the allusion to “crossing the Rubicon,” the occasion on which Julius Caesar committed his army to capturing Rome, with no possibility of turning back. I have argued that the Anglican Communion is standing on the edge of a Rubicon in its identity and mission, whether to depart from the clear teaching of Jesus and the Bible. In fact, some Anglicans have already crossed over, and the mother Church of England appears committed to going the same way and “ferrying” many of the Global South Provinces with it.

The Gafcon movement is standing firm on the Gospel side of the Rubicon and saying “No, we won’t go with you.” This obstinacy, especially in light of Gafcon 2018, is pushing the Communion Establishment one step further: to bully the Primates and Provinces to attend Lambeth 2020 – or else.

In particular, Gafcon is standing firmly behind the teaching of the 1998 Lambeth Resolution I.10 on Human Sexuality, which stated that God has designed two and only two ways of faithful sexuality – marriage and abstinence – and that homosexual practice is “incompatible with Scripture.” In passing this Resolution, the Communion majority, led by the Global South, spoke truth to power (i.e., the power of the Anglo-American bureaucracy) on a matter of fundamental Christian doctrine. By crossing over this doctrinal line before and after Lambeth 1998, the Episcopal Church USA ensconced heresy in its the teaching and practice and has encouraged others to do likewise.

The refusal of successive Archbishops of Canterbury, whose office is supposed to serve as the “focus of Anglican unity,” to deal with this heresy put the entire Communion at risk. Gafcon 2008 took place because Rowan Williams, having promised to discipline the Episcopal Church, reneged on that promise, and Justin Welby has continued down this same path. Meanwhile Gafcon has continued to grow and mature as its own instrument of communion, indeed one which a majority of the world’s Anglicans are now looking to.

The position of the Lambeth bureaucracy has been consistent denial, obfuscation and manipulation. As Gafcon 2018 approached, Archbishop Welby dismissed it as a “ginger group,” a small single-issue lobby. Then as it became clear that many Global South Primates had registered for Gafcon, Archbishop Welby, accompanied by the Secretary General of the Anglican Communion Office, Bishop Josiah Idowu-Fearon, traveled to Africa to cajole the Global South Primates to be no-shows. As an incentive, Bishop Fearon promised the Primates “facilitation” for all their bishops to attend Lambeth 2020.

Let me pause here to compare the way that Gafcon supported poorer churches with Canterbury’s approach. Gafcon offered partial bursaries for a six-day conference, financed by cost-sharing with wealthier churches and participants. Canterbury will offer an all-expense-paid three-week holiday to be covered out of legacy funds: various foundations and endowments in the US and UK. May those tempted by Canterbury’s package deal consider this saying of our Lord: “Let the dead bury their dead, but go thou and preach the kingdom of God” (Luke 9:60 KJV).

In his report on the Africa meeting, Bishop Fearon notes the elephant in the Anglican living room, Lambeth Resolution I.10:

The Primates were honest and open and committed to holding on to Resolution I.10 (from Lambeth 1998) – but were willing to listen to other members of the Communion who find that Resolution restrictive. So there was a sense of brotherhood and belonging.

One can see here Lambeth teeing up the goal of the 2020 Lambeth Conference: to defang Lambeth I.10. If I may paraphrase:

Come to Lambeth. We shall not try to overturn your primitive attachment to the former Lambeth teaching on marriage. But you will meet some brilliant scholars and bishops who find that teaching “restrictive,” and you will hear touching stories of loving homosexual partnerships that have been blessed by the church. We can all go home then with a sense of brotherhood and belonging.

It seems that his appeal to choose Lambeth over Gafcon fell flat (one registered African Primate, to my knowledge, chose not to attend). So in what can only be seen as a desperation move (what we American footballers call a “Hail Mary pass”), the Secretary General sent out a confidential letter to the Primates four days before Gafcon began.

This letter perfectly represents what I have been calling the “Lambeth Establishment.” Bishop Fearon, a well-chosen mandarin of this Establishment, begins by flattering the Primates as “one of the four instruments that make up the smooth running of our Communion of churches.”

It is hard, frankly, to read this description of the “smooth running” bureaucracy with a straight face. It reminds me in an ironic sense of Ezekiel’s vision of the Divine Chariot, perfectly engineered with wheels within wheels and directed by the divine Spirit (Ezekiel chapter 1). Nothing could be further from the reality of current Instruments, in which the Canterbury and the Anglican Communion Office have neutered the Primates’ Meeting, manipulated the Anglican Consultative Council, and turned the Lambeth Conference into an indabafest (see Essays 4 and 8 of my book for detail).

However, Bishop Fearon goes on to warn, one Primate – Nicholas Okoh of Nigeria – has thrown a spanner into the works by announcing that Gafcon is setting up nine networks (see now the Gafcon Letter to the Churches) to promote the work and mission of the church. Fearon protests: “This appears to be a call to GAFCON members to endorse a parallel administrative organization to the existing one within our Anglican Communion.” Since the perfectly-tuned vehicle operated by the Communion Office already has relevant networks, he complains, Gafcon’s “route would be one of division and confusion and should be questioned and avoided.”

I am therefore calling for your prayers and counsel in relation to GAFCON. Whilst it is a group that claims to champion “renewal”, it appears to be setting up what clearly looks like a rival structure that is clearly not in conformity with our understanding of what it means to be Anglican.

One of the primary roles of the Communion Office, it seems, is preserving the Anglican™ brand. Anything not sponsored out of Canterbury is not truly Anglican. For instance, the 2017 Primates’ Communique not only denies the Anglican Church in North America membership in the Communion, but even the name “Anglican.”

Having raised the alarm, Bishop Fearon now drops the hammer: “I call for your prayers and wise counsel on how avoid the potential for schism within our Anglican Communion.” “Schism” is the ultimate scare word in the Communion glossary. The question, of course, is whether schism from a heretical church is the ultimate sin or, as Richard Hooker said on behalf of the Church of England, it is “our reasonable service to God” (“Sermon on Jude” §15).

No doubt the Communion Office calculated, or at least wished, that a strongly worded message from Headquarters might deter one or more of the Primates. The fact that none of them in fact was swayed by it indicates the futility of such a desperate gamble. Gafcon met without a hitch, and the publication of this confidential letter highlighted the difference between the well-oiled “Instruments” spinning smoothly in UK and the living Body of Christ gathered for fellowship, worship and council.

The bullying did not work. It was more pathetic than threatening. However, an event later in the week caught my attention which did strike me as truly malign. Archbishop Masimango Katanda of Congo attended the Conference and met with the Gafcon Primates. So on the second day, the Communion Office released a video of the Archbishop expressing his intention to attend Lambeth 2020 and his affirmation of Canterbury as the necessary link in Anglican unity.

Archbishop Masimango may give his own explanation of these statements. I do not know whether he and his bishops will attend Lambeth 2020. My impression is that he is a good and godly man who is in agreement with the principles of Lambeth I.10 and of the Gafcon movement. He is also a man from a poor and war-torn country who may well have been entrapped in making these statements. But whatever the back story, the Communion Office revealed its true nature in its eagerness to humiliate one of its Primates for the sake of scoring a political point over Gafcon.

The Lambeth Establishment tried – not for the last time, I suspect – to bully the Primates in order to drag them over the Rubicon of compromise with Scriptural truth. The attempt failed, but in so doing it revealed itself to be not a genuine instrument of the Gospel but a coldly calculating political lobby. A ginger group perhaps? 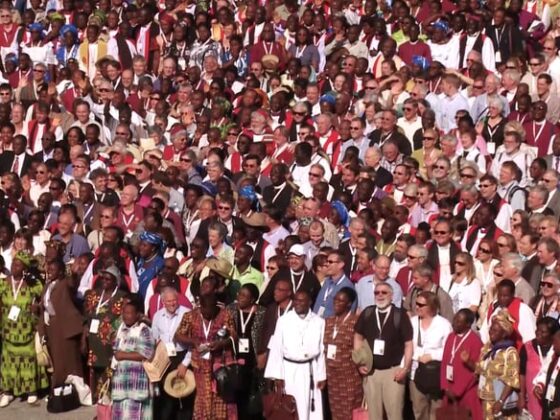 REPLY TO FULCRUM ON GAFCON 2018