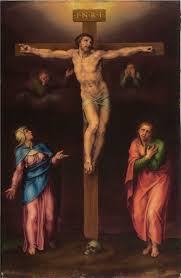 John 19:23-27 When the soldiers had crucified Jesus, they took his garments and divided them into four parts, one part for each soldier; also his tunic… 25 but standing by the cross of Jesus were his mother and his mother’s sister, Mary the wife of Clopas, and Mary Magdalene. 26 When Jesus saw his mother and the disciple whom he loved standing nearby, he said to his mother, “Woman, behold, your son!” 27 Then he said to the disciple, “Behold, your mother!” And from that hour the disciple took her to his own home.

Today we remember the Passion of Jesus Christ. The word “passion” sounds odd to us, does it not? We associate passion with positive things, like love – “I love you passionately” or achievement – “he pursued an Olympic medal passionately.” But here on Good Friday, we think of Jesus’ passion as enduring something, from which we get the word “passive.”

It may help to think in terms of an endurance race. A runner has to subject his body to all kinds of rigors in order to compete for the prize. This image of Jesus’ passion is found in the Letter to the Hebrews, which states:

… let us run with endurance the race that is set before us, looking to Jesus, the pioneer and perfecter of our faith, who for the joy that was set before him endured the cross, despising the shame, and is seated at the right hand of the throne of God (Hebrews 12:1b-2).

So what did Jesus endure? Anyone who has seen Mel Gibson’s The Passion of the Christ knows the awful pain – the flesh-tearing scourging, the crown of thorns, the nails pounded into the tendons, the gasping for breath. No question, the Romans knew how to inflict pain. But the Hebrews quotation alludes to another feature of endurance when it says that he suffered “despising the shame.”

This third Word of the Cross is prefaced by this statement: “When the soldiers had crucified Jesus, they took his garments and divided them into four parts, one part for each soldier; also his tunic…” Jesus was crucified naked. The whole purpose of Roman crucifixion was to publicly humiliate an enemy of the state. What better way to do this than to nail a man naked on a stake and tack a sign above him saying “The King of the Jews.” It was a twofer for the Romans, not only mocking Jesus but mocking the whole idea of a Jewish messiah.

Thinking about our dark passions, I would argue shame is even more primal than pain or fear. Shame was the first response of Adam and Eve to sin, as they covered their nakedness with fig leaves. Shame, I think, was the primary motive that led Peter and the disciples to deny they were associated with Jesus. You see, shame involves public perception, which is even more powerful than private guilt. We blush when we experience shame. Even when we know we have been forgiven, we blush inwardly when we recall our shameful actions.

For ten years, my wife and I lived in Africa, which is often thought of as a “shame culture” with many primitive taboos. But the West is no different. We may seem to live in a shameless society with shameless leaders. But not so. Shame is alive and well, as one can easily discover by venturing out on Twitter (I don’t). One big change in the shame culture today is that being a Christian has gone from being respectable to being deplorable.

A couple weeks ago I was on a plane and a young man in an adjacent seat – he said he was a banker with Goldman Sachs – asked me what I did for a living. When I said I was a Christian minister, he broke into a three minute profanity-laden rant. Science, he said, had utterly disproved the Bible, and in any case the God of the Bible was a horrible murderer, ripping babies from their mothers’ womb – and on and on. Finally, when he paused for breath, I asked this poor young man: “So what is your alternative?” “I don’t know,” he said. (I then told him how I had grown up as an agnostic and come to faith.)

So here on Good Friday, we find Jesus crucified naked on a hilltop for all to see, surrounded by four soldiers rolling dice for his garments and four women, along with Jesus’ best friend John, the Beloved Disciple. Here is the mother who took her naked baby and wrapped him in swaddling clothes; here is the friend who just the night before had rested on Jesus’ chest at the Last Supper, hearing him pray to the Father.

I imagine that while they stand near the Cross, they do so with their eyes cast down to the ground, silent and dumbfounded. It is Jesus who speaks to them and says in effect: “Lift up your eyes and behold me. Behold the Man for others! Behold the Lamb of God, who takes away the sin of the world. Do not be ashamed. I am!”

Jesus then entrusts his mother to his Beloved disciple. In one sense, this is a remarkably practical act, fulfilling the Commandment to honor one’s father and mother. But didn’t Jesus have brothers? Why John? As always, Jesus works on two levels; his mundane words are also heavenly signs, pointing to the Father. The Virgin Mary has often been seen as a symbol of the Church, and John as the supreme Evangelist, the high-soaring eagle of the Gospel of the Word made flesh. Even as Jesus entrusts his mother to his friend, he entrusts the Church to the Word and the Word to the Church. You cannot have the one without the other. You cannot read the Bible on your own without the preaching and sacraments and fellowship of the Church. You cannot attend church week by week without hearing, reading, and learning from God’s Word written.

This past year we celebrated the 500th anniversary of Martin Luther’s recovery of the biblical Gospel, whose key text was Romans 1:16: “For I am not ashamed of the gospel, for it is the power of God for salvation to everyone who believes, to the Jew first and also to the Greek.” Believers are to be single-minded and unashamed of the Cross in words of the old hymn: “Simply to Thy cross I cling; naked, come to Thee for dress, Helpless, look to Thee for grace.”

Now let me return to my opening quotation from Hebrews about Jesus’ passion as enduring the shame of the Cross. In truth, Jesus’ passion is not passive. It is active: “he despised the shame…” How could this be? At the heart of the Gospel is the conviction that Jesus Christ was not a victim in the common sense of the word but that He chose to embrace the Cross. He chose it, not for His own sake, but for our sake. John Calvin put it this way: “Christ was stripped of His garments that He might clothe us with His righteousness.”

In lifting the eyes of His mother and friend to His naked form, Jesus was displaying Himself as a something new, the Second Adam. He was promising them that, when they met him after Easter, it would be the same Body, the same Person, who died on the Cross, not some ghost or figment of imagination. His resurrection Body would be glorified, as our bodies will be on the last day, glorified with and through the marks of humiliation. This is why Wesley’s hymn can sing: “Gaze we on those glorious scars!”

In speaking to his mother and friend, Jesus was also showing forth a new kind of love, what the Bible calls agapé. It is a love that is rooted and partially known in human loves – of mother and son, of close friends, of husband and wife – but is uniquely of God.

This love is the true passion of Jesus Christ. This love brings with it a unique companion – joy. Hebrews speaks of the “joy that was set before Jesus.” That joy bursts forth on Easter morning, but the Risen Body of Easter is the same Body broken for us on Good Friday.

Which is why the passion of Jesus can be called good. So, brothers and sisters, let’s “enjoy” Good Friday, even as we, like the Mother and Friend, lift our eyes to the Crucified One. Let us joyfully sing:

Let us pray: Lord Jesus Christ, you turned an instrument of shame into a sign of glory and entrusted to your church the Word of the Cross. Grant, we pray, that we may receive this Word with gratitude and humility and not be ashamed to proclaim you as our King, to the glory of God the Father. Amen. 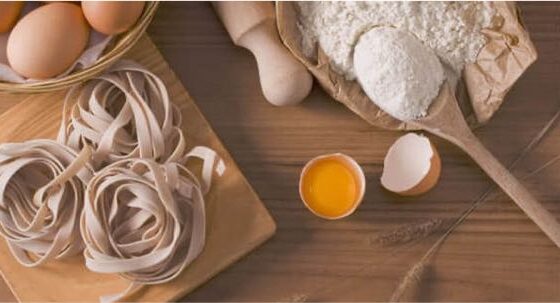 The Person And Work Of The Holy Spirit 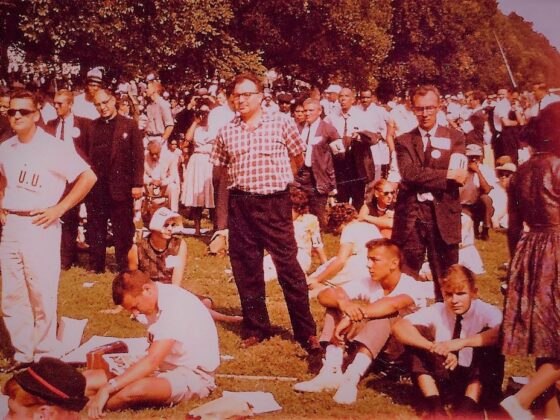 Anecdotage: I WAS A SIXTIES RADICAL