When I was Vice Chancellor at Uganda Christian University, I offered to show a weekly movie as part of something called “The Mars Hill Film Club.” I asked students to prepare for the viewings by reading some Notes on the movie.

For this week’s “Favorite Film Friday,” I am simply attaching my Notes for Casablanca from 2007, with this preface.

Why do I love Casablanca? It’s because I imagine my parents, who had lived through the Great Depression, and my cousins, who were training in the Marines to fight in the Pacific, and all the members of the “greatest generation” – I imagine them watching Casablanca when it came out on Thanksgiving Day 1942, two weeks shy of Pearl Harbor Day 1941. As the film opens, with the shadow of Nazi conquests moving across Europe and beyond, what must they have felt, what fears, what hopes, what commitment? How must they have reacted to Rick’s line: “it doesn’t take much to see that the problems of three little people don’t amount to a hill of beans in this crazy world”?

The film has some classic lines and music that have been enshrined in cultural memory (see below). The drowning out of the Nazis by the customers at Rick’s singing the “Marseillaise” always breaks through my tear barrier (a friend informs me that in the ’60s Harvard students would get up from their seats at this point in the film and join in singing).

Casablanca is always rated by movie critics among the top five films of all time, often as the greatest. It is a story of love and war. Taken by itself the love story is unremarkable: two people fall in love (that’s the Western way of romance at least). The war story for today’s viewers is more problematic, as World War II is a fading memory. In order to understand the tension of these two themes, one must understand the historical background. It is especially touching to realize that the film was itself “propaganda” for the Allied war effort in America produced within one year of the bombing of Pearl Harbor on December 7, 1941. (Imagine the impact if Flight 93 had been shown in theatres on September 11, 2002, rather than 2006.) Casablanca alerted Americans to the terrible sufferings of people under the Third Reich, the full realization of which would only be completed in the conquest of the death camps in 1945, and to the sacrifices that would be called for to defeat it.

Casablanca – a city in French Morocco. Africa is presented as a place of refuge and an exotic blending of cultures, heightened by the influx of refugees from all over Europe.
Third Reich – Adolf Hitler’s Germany, which conquered France in 1940.
The Gestapo – the German secret police.
Occupied France – that part which the Germans conquered directly in 1940, including Paris.
Vichy France – the puppet French government under the domination of Germany with its capital at Vichy. Casablanca was in Vichy, called “unoccupied” in name only.
Free French – those French who refused to accept German occupation and fought against them. Gen. Charles de Gaulle was exiled in England and led Free French troops back to France in 1944 during D-Day. They reentered Paris later that year.

The movie has a lot of music, often popular music of the 1930s, but two songs dominate.

One of the most moving scenes is the musical competition, for which Rick nods approval, between the Germans and French. Note that the film ends with this anthem, clearly an inspiration to those who would be preparing to return to France and to fight with the French Resistance against the Nazis.

Rick: “I stick my neck out for nobody.”

Renault: And what in Heaven’s name brought you to Casablanca?
Rick: My health. I came to Casablanca for the waters.
Renault: The waters? What waters? We’re in the desert.
Rick: I was misinformed.

Strasser: What is your nationality?
Rick: I’m a drunkard.
Renault: And that makes Rick a citizen of the world.

Rick: How can you close me up? On what grounds?
Renault: I’m shocked, shocked to find that gambling is going on in here.
Attendant (to Renault): Your winnings, sir.
Renault: Oh. Thank you very much. Everybody out at once.

Rick: “Ilsa, I’m no good at being noble, but it doesn’t take much to see that the problems of three little people don’t amount to a hill of beans in this crazy world.”

Renault (knowing that Rick has shot Strasser): “Major Strasser has been shot. Round up the usual suspects.”

Rick: “Louis, I think this is the beginning of a beautiful friendship.” (Last line of film, as they walk off, arm in arm.)

Image credit: “Casablanca” by www.brevestoriadelcinema.org is licensed under CC BY 2.0. 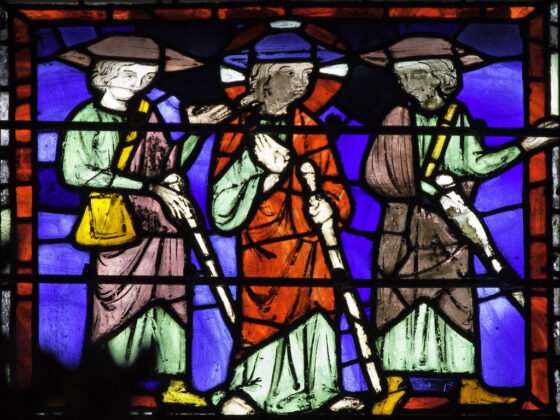 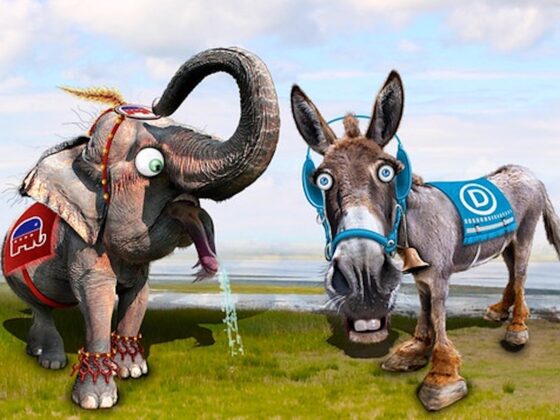 WHY NOT VOTE FOR SPLIT GOVERNMENT? A Letter to the Editor of Christianity Today