“What’s in a name?” Shakespeare’s doubting Juliet asks. So why title a book “The Global Anglican Communion” when I could have chosen otherwise? Juliet is tragically mistaken – names matter – and so, I contend, one cannot wish away the tragic truth: that the name “Anglican Communion” no longer defines a coherent Christian body.

THE CRISIS OF ANGLICAN IDENTITY

Anglicanism has come to a crisis point in its history, a noble history to be sure, but like all histories subject to the judgment of God. And as the prophets of old warned the leaders of Israel, it is not enough to recite “the temple of the Lord, the temple of the Lord,” and not do those things which the Lord requires (Jeremiah 7:1-7).

Ten years ago, the Global Anglican Future Conference (GAFCON) met in Jerusalem and stated this indictment of the official Communion in its Jerusalem Statement:

This indictment did not emerge overnight. It was the sober conclusion of ten years of controversy following the approval in 1998 of Lambeth Resolution I.10 on Human Sexuality. That Resolution, sponsored by bishops of the Global South and passed by an overwhelming majority, had addressed the rising issue of homosexuality by affirming our Lord’s teaching of lifelong monogamous marriage of a man and a woman or of abstinence as the only two ways of sexual expression (Matthew 19:1-12) and rejecting homosexual practice as “incompatible with Scripture.” This moral teaching was and continues to be spurned the Episcopal Church USA, later joined by others. In a subsequent series of meetings, the “Instruments of Unity,” including the Primates and Anglican Consultative Council, called these churches to repent, but they would not. The Archbishops of Canterbury failed to exercise their moral authority, and in 2007 Rowan Williams explicitly reneged on a commitment to his fellow Primates to carry out their resolutions.

Hence 280 bishops attended GAFCON in Jerusalem in 2008, most of whom did not attend the Lambeth Conference later that year. Not surprisingly Lambeth 2008 dithered away its time in “indaba,” and the blessing of same-sex relationships has expanded not only in scope (now including 5 provinces) and in diversity, adding “transgender” priests to its menu. Meanwhile, it is apparent that the authorities in Canterbury are preparing to give official sanction to same-sex (sexual) partners, while allowing conservatives to refuse this practice under the banner of “good disagreement.”

The problem with all this is that a church that takes this path is not the church of Jesus Christ, who said: “No one can serve two masters, for either he will hate the one and love the other, or he will be devoted to the one and despise the other” (Matthew 6:24). The apostle James warns of the “double-minded man, unstable in all his ways” (James 1:8). How much more the double-minded church. For again the Lord of the Church warns that a house divided against itself cannot stand (Mark 3:25).

So matters stand with the “Anglican Communion.” Like Esau it has forfeited its birthright and its blessing. Gafcon 2008 described this state of affairs as a “fact.” Nothing in the last ten years has changed that judgement.

This is why I write about the “Global Anglican Communion.” Let’s look at at what’s in a name:

In the providence of God, the Gospel in the Anglican tradition spread across the globe, especially in the 19th and 20th centuries with the expansion of the British Empire. Today churches representing the Gafcon and Global South movements total about 50 million members, out of a nominal 85 million total. In particular, Gafcon churches account for about half of the total membership.

The term “global” also reminds the church of the unfinished task of world evangelization in a world where 5 billion people have not heard the Gospel proclaimed. Hence the Jerusalem Declaration declares:

9. We gladly accept the Great Commission of the risen Lord to make disciples of all nations, to seek those who do not know Christ and to baptise, teach and bring new believers to maturity.

The churches of the Global South are fiercely Anglican. Most received the Gospel through Anglican missionary societies like the Evangelical Church Missionary Society (CMS) and the Anglo-Catholic United Society for the Propagation of the Gospel (USPG). These missionary churches have, by and large, remained faithful to the faith, even under persecution. Hence Bishop Adebiyi of Nigeria stated in the debate over the Sexuality Resolution in 1998:

The CMS brought Christianity to Western African about 150 years ago, and when the CMS came, they came holding the Bible, telling us that what they believe is what has come from the word of God. And, so our forefathers meticulously accepted the Christian faith and religion that was tied to the word of God and the Scriptures. Therefore, we accept the Scripture as the most authentic we should follow.

The Jerusalem Statement makes clear that Anglican Christianity is essentially biblical and historic Christianity when it states the “core identity” in these terms.

This language intentionally refers to the definition of core doctrine stated in the canon law of the Church of England (Canon A5). If this statement represents the gold standard of Anglican belief, the question arises: “Who moved the goalposts?”

The word “communion” translates the New Testament Greek word koinonia. This word expresses the deeply personal love of the Father and the Son in the Holy Spirit (2 Corinthians 13:14). This divinely-based love, the apostles Paul and John tell us, has been shed abroad in our hearts when we receive his justifying grace and are born again through faith (Romans 5:1-5; John 3:1-16). We receive and seal this faith personally and corporately through baptism in the Church, which is the Body of Christ. St. Paul puts it this way:

The body is a unit, though it is made up of many parts; and though all its parts are many, they form one body. So it is with Christ. For we were all baptized by one Spirit into one body – whether Jews or Greeks, slave or free – and we were all given the one Spirit to drink…. Now you are the body of Christ, and each one of you is a part of it. (1 Corinthians 12:12-13, 27)

The goal of GAFCON is not to divide the church but to restore genuine communion in the Spirit. Hence the Jerusalem Declaration, like the Lambeth Quadrilateral, affirms our Lord’s prayer for the unity of the church (John 17:20-23):

11. We are committed to the unity of all those who know and love Christ and to building authentic ecumenical relationships. We recognise the orders and jurisdiction of those Anglicans who uphold orthodox faith and practice, and we encourage them to join us in this declaration.

12. We celebrate the God-given diversity among us which enriches our global fellowship, and we acknowledge freedom in secondary matters. We pledge to work together to seek the mind of Christ on issues that divide us.

13. We reject the authority of those churches and leaders who have denied the orthodox faith in word or deed. We pray for them and call on them to repent and return to the Lord.

Because of this concern for unity, the two overlapping Anglican movements that emerged from the Global South – Gafcon and the Global South Anglican Network – have been working together. Both, for instance, have announced impaired or broken relationships with those who have defied Lambeth I.10, and both have recognized the Anglican Church in North America and seated its Primates on their councils. Essay 9 in my book is an urgent appeal for these sister churches to come together under one Covenant umbrella.

THE GLOBAL ANGLICAN COMMUNION AND THE FUTURE

The term “Global Anglican Communion” is aspirational. It is a vision of things to come; it looks to a future entity that fulfils God’s providential guidance for worldwide Anglicanism. It is not of course the New Jerusalem but a communion that takes shape imperfectly under the mercy of God, affected by the contingencies of history and the flawed character of even well-intentioned men and women.

As for the so-called “Instruments of Unity” – the Archbishop of Canterbury, Primates’ Meeting, Anglican Consulative Council, and Lambeth Conference – the sad “fact” stated in the Jerusalem Statement is that they have signally failed to unify. Indeed, they have promoted disunity by colluding to give a pass to clear violation of Holy Scripture. Therefore let me put the state of affairs boldly: Lambeth 1998 was the last true conference of Anglican bishops, and the Primates’ Meeting in Dar es Salaam in 2007 was the last true meeting of Anglican Primates to gather under the aegis of the Archbishop of Canterbury. The true heirs of these “Instruments” were the subsequent Global Anglican Future Conferences in Jerusalem and Nairobi and Global South “Trumpet” meetings in Singapore and Cairo.

It will come as no surprise when I say that the powers that be in Canterbury do not see the future this way. Lambeth Palace and the Anglican Communion Office (and its financial backers in New York) are working diligently to create division in the Global South, to discredit the coming Conference in Jerusalem, and to promote Lambeth 2020 as the true heir. If they succeed – and they might – they will not in fact restore a true Anglican communion of churches but rather construct a Potemkin village of serfs under one colonial baron. To catch this vision of the future, look at the charade called a Primates’ Meeting in October 2017, where the Primates were paraded around Canterbury Cathedral and treated to days of meaningless indaba followed up with a harsh unsigned Communiqué condemning Gafcon for “border-crossing” and disowning the Anglican Church in North America as an Anglican body.

The true vision of the Anglican future, or so I contend, is

a vision of a renewed and reformed Global Anglican Communion, a communion of churches that builds on the heritage of the Church of England and represents the emerging leadership of formerly colonial Anglican churches, whereby the oversight of doctrine and discipline has shifted from Canterbury to the Global South. 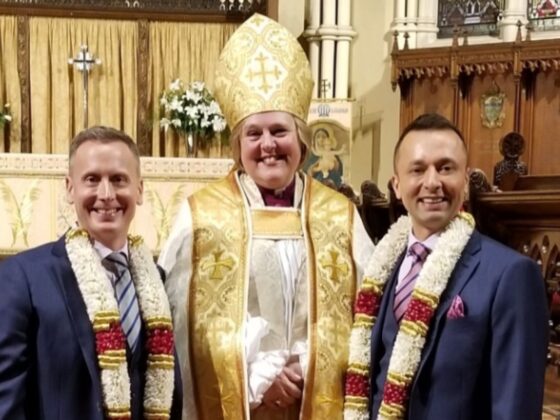 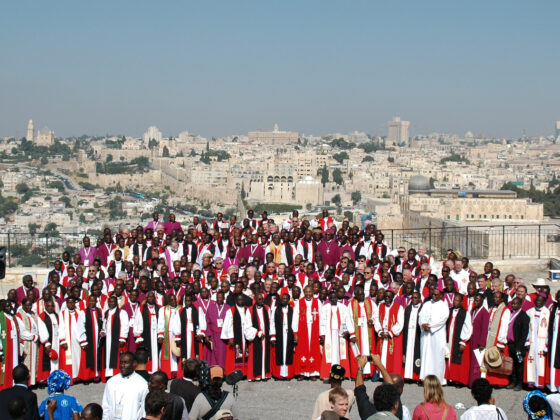 SLOUCHING TOWARD LAMBETH, LOOKING TO GAFCON: In Seven Contentions